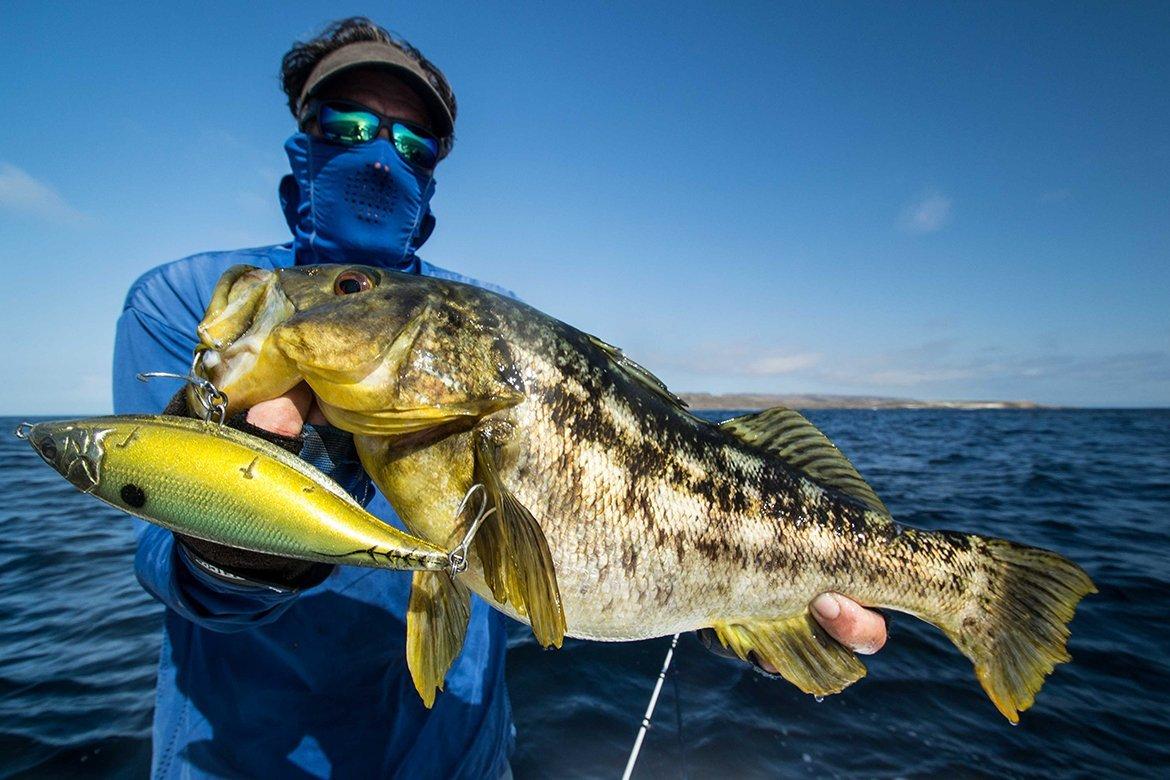 Even magic places like San Clemente Island â€” which lies 60 miles off the California coast â€” can have slow fishing. More often than not, however, all it takes is a magic moment for the day to turn around and the needle on the epic scale to climb to the top. That was the case for Patrick SÃ©bile and Captain Jimmy Decker on a late summer trip to the island out of Newport Harbor.

"I had the best day of calico bass fishing in my life!" says Patrick. "I went with Jimmy Decker and we caught over 100 calico bass to 7 pounds fishing the new generation of SÃ©bile lures."

The 2nd Generation SÃ©bile lures were redesigned specifically with reinforced bodies and hardware to handle non-stop action for hard biting, hard fighting fish like the calico (kelp) bass, an aggressive saltwater game fish that readily hits everything from topwater lures to deep water jigs. Yet, just like their freshwater cousins, skill in casting and presentation make all the difference in getting the fish to commit!

"We started out on the front (lee) side of the island and there was no kelp, " notes SÃ©bile. Kelp is a fast growing seaweed that is often found in large patches known as kelp beds, yet the beds can be rare during warm water seasons.

"I know from experience which lures work best in the open water," he adds. "The Flatt Shad has been very good for the calico bass and the Flatt Shad 66 Extra Heavy was the lure that started the day very well. The fishing was very much like power fishing for freshwater bass â€” cast to shore and if it is shallow, crank immediately, if deep let the lure sink out.  If the water was much deeper I would jig the lure."

Patrick likes to use 30- or 50-pound SpiderWire fishing the Flatt Shad and will drop as deep as 50 feet when employing a crank and drop jigging motion.

"After that we went to the backside of the island and we started to find kelp," he says. "We were able to twitch and crank the Magic Swimmer Hard for bites. Sometimes the bass stop when they get behind the lure. Sometimes those fish would hit if you paused the lure, sometimes when you started to crank again."

About mid-day, fast moving schools of bonito popped up just offshore of the backside of Clemente. They may be one of the smaller members of the tuna family, but they pack the same pound-for-pound genetic punch.

"We had two rigs that worked great on the bonito," notes SÃ©bile. "One was the 114 Stick Shadd Sinking fished on the new size 4500 Penn Slammer III spinning reel with 20-pound Blue Camo SpiderWire on a 7 1/2-foot rod. The other setup â€” and this one would also be key later â€” was the new 6500 Penn Slammer III with 40-pound Blue Camo and the 155 Stick Shadd Fast Sinking.

"The Stick Shadd is a lure that flies really far and fast when you cast and it can be fished deep or up on top," he adds. "Many times I have been asked which is my favorite lure.  I say I don't have a favorite, but the one I use time after time is the Stick Shadd. Because of the power keel, you are able to impart a lot of actions. You almost can't go wrong."

Between noon and 2pm, Decker and SÃ©bile were able to make long casts to the bonito schools and hook up.

"We would crank the Stick Shadd as fast as we could using a twitch-twitch action with the fast retrieve," Patrick recalls. "It drove the bonito mad, we had big schools follow the lure before one hit."

"Then we got closer to the island in an area with big boulders and kelp, and focused more on the Soft Magic Swimmer," says SÃ©bile. "It's very interesting to my point of view that now that we have reinforced the lure with mesh, it has a 3 times stronger body and can catch 3 times the fish. It also has a better finish, paint and hook and a more competitive price."

They were using the 160 (6 1/4-inch) and 200 (8-inch) sizes. Patrick notes another key feature of the 2nd Generation Soft Swimmer is the hook position.

"The hook is really at the edge of the lure's back, you can just barely feel the point of the hook," says Patrick. "You can really cast deep in to the heavy cover of the kelp fishing with 65-pound Blue Camo on a heavy rod. When you get a strong bite, set hard, when it's a soft bite just count a couple three seconds to let bass eat the bait.

"The new wide gap hook comes with new weight system that holds up to saltwater," he adds. "Now I have the weight on the hook positioned for a perfect swimming action right out of the package."

SÃ©bile says the built in action works in a number of ways.

"When I would see a calico coming to the bait and not biting, I would pause the Soft Magic.  When you pause the retrieve, the Soft Magic swirls down like a dying baitfish. You get that kind of action and the calico will jump on the bait at that moment. If not just twitch or start swimming again."

The best was yet to come.

"Around 3 in the afternoon we moved up to a big kelp bed and that's where everything went nuts," recalls Patrick. "We were mostly using the Stick Shadd 114 and 182 and every cast you could see 5 to 10 bass chasing the lure. The more action you put on the lure, the bigger the clouds of bass behind it.

"Several times we hooked two bass on one lure," he adds. "The topping to the day was Jimmy' catching a 7-pound and a 3-pound calico on the same Stick Shadd 182!

Fishing for calico bass at San Clemente Island is fantastic, especially with Captain Jimmy Decker. I would love to come to California more often for that."