Given all of the various casts and different presentations that can be made with spinning gear, the versatility of a spinning combo is truly remarkable. In this article we will explain five different casting techniques to use on your next fishing trip. 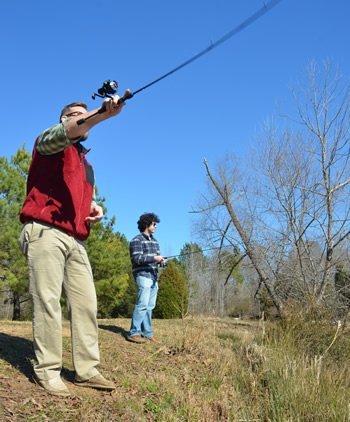 The heave-ho is the most common cast made by casual anglers who just fish once or twice a year: beach goers, bank anglers, and pier anglers. For them the object is to just get a line out there in the water. And by all means, the old heave-ho accomplishes this task.

The heave-ho is essentially a big lob cast that starts with the angler extending their arms way back behind them then heaving the rod overhead, releasing the line so the lure/bait or rig flies high up into the air. The heave-ho can also be accomplished by reaching way back around to the side, much like a golfer with a club, and sort of hurling the rig out into the water sideways.

Again, there is nothing wrong with the heave-ho. If you have plenty of room for all of the lobbing and hurling, it gets the job done, especially when launching heavy bottom rigs in the 3- to 6-ounce range on big shore-casting tackle.

Where things get confusing is when an angler tries to apply the heave-ho on a lure that is less than an ounce with smaller spinning tackle. This becomes a case of overexertion â€“ there is simply no need to put that much body into such a cast.

The key to mastering spinning tackle efficiency and accuracy is to load the rod up and let the rod do the work launching the lure for you. So instead of â€œwinding upâ€ and reaching way back to lob or hurl the rod with your whole body, itâ€™s more of a tight, circular sidearm whip that loads the rod tip and flicks the lure out there. It takes two hands to make an effective sidearm flick cast, one over the reel seat where you would normally hold a spinning rod and one on the rod butt. Click the bail open, drop the lure down 6 to 8 inches from the tip and grab the line with the forefinger as you normally would. Now whip or sling the lure around in a tight circle and let the line go, the inertia stored in the rod will essentially flick the lure out there for you. Congratulations, you have just made a sidearm flick cast! The lure may not have gone the direction you wanted the first time, but thatâ€™s okay. The first step is to get a feel for loading the rod up to â€œflickâ€ the lure out there. Try whipping the lure in a small circle or loop (to load the rod) and then release the line at the bottom of the circle. Do this several dozen times until you get a feel for where to let the line go for correct direction of travel for the lure. Eventually you will learn exactly when to release the line to get the most distance and accuracy out of the rod. Once you get a feel for the mechanics of it, you should be able to easily flick cast a lure some 40 to 70 feet with nothing more than a flick of the wrists. The sidearm flick cast is an excellent choice for making long, low casts to cheat the wind and avoid spooking fish with a big splash from far above.

The skip cast is just another variation of the sidearm flick cast, except you release the lure so low to the water it literally skips on the water to sneak up under docks, cables and overhanging limbs. Tubes and small finesses jigs are excellent skipping tools with spinning tackle.

Think of a backhand in tennis or racquetball and you get a better idea of what a backhand cast looks like. Itâ€™s basically a reverse flick cast done across your body and it is excellent for hitting tight cover or close targets from a different angle.

A pitch cast is yet another form of a flick cast, except the loading of the rod is done in a forward upswing of the rod instead of a sidearm loop or circle. You will need to let out more line, about 4 to 5 feet, before making a pitch cast. Since there is not as much â€œwhipâ€ to a pitch cast, it takes more line to load the tip up on the up swing. Let the line go at the top of the upswing and youâ€™ll see you can make a nice 30-foot pitch with very little effort at all. The pitch cast is great for fishing repetitive close targets like pilings, standing timber or along bluff walls or seawalls.