Looking to get control of your spinning gear and become more proficient at catching fish with it? Here are six spinning tackle tips to get you started. 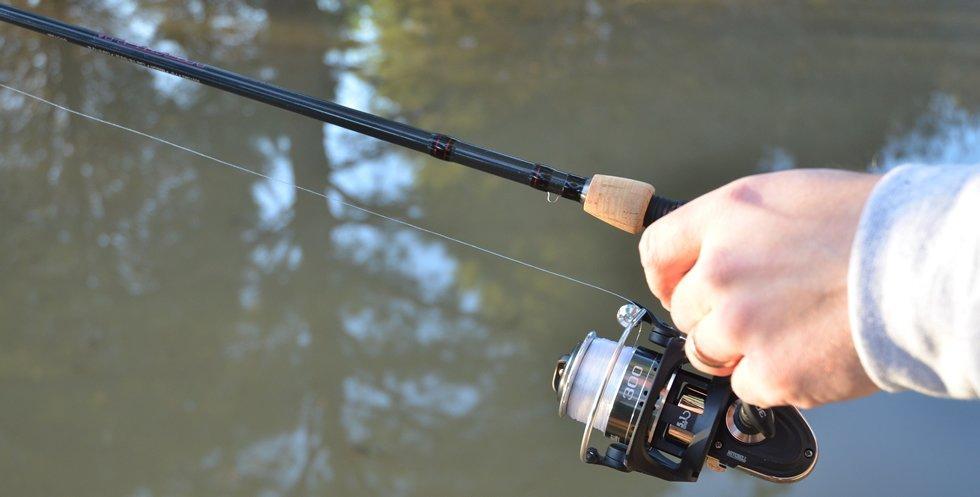 These days, the vast improvements in fluorocarbon lines and braided lines have made line management on spinning reels much easier. Of the two, braided line is superior on a spinning reel. It is small in diameter, casts far, has no stretch, is incredibly strong, is extremely durable, and, most importantly, has virtually no line memory. All of these attributes make braided line a dream come true for spinning gear. In the yesteryear of monofilament only, if you wanted a 20-pound line on your spinning reel, you had to spool what seemed like weed eater string on the reel. Thanks to the braided line evolution, you can easily spool up to 20-pound line â€“ even 30-pound line â€“ and it's only the diameter of 6- or 8-pound monofilament. The only drawback is that braid is visible in clear water and may cause "line shy" fish avoid your offerings altogether. For this reason, many anglers who use braid on spinning reels will tie on a fluorocarbon leader before tying on their lure. One of fluorocarbon's best attributes is that it is virtually invisible in the water, making lures look more natural. As a result, some spinning tackle enthusiasts like to spool up fluorocarbon only so they don't have to mess with leaders. Fluorocarbon, however, is not as thin as braid and has more line memory and coil. If you are going to go with fluorocarbon as your primary line, staying with line sizes under 12-pound test will help with the manageability of it.

Knowing how full to fill a spinning reel spool with line can alleviate a lot of problems. If you under fill it, you lose casting distance to friction on the spool lip; if you over fill it, line will come flowing off the second you click the bail open. The optimum level is to fill the spool to within about a 1/8 of an inch from the outer edge of the lip of the spool. This leaves enough lip to retain your line, but is full enough to launch long casts.

Getting the twists out

Over the years there have been various suggestions offered on how to spool up new line onto a spinning reel to avoid incorporating line twist into the process. No matter how you spool up, the best way to avoid getting line twist is to remove it altogether. To do this, pull out some 75 to 100 yards of line (no lure) across an open field or parking lot and reel it back up holding the line between your thumb and forefinger as if you are "squeezing" the twist out. Do this twice and it will assure your line is straight and twist free before tying on lures. If you are on a boat and need to eliminate line twist fast, simply cut off the lure, let out your line and troll the empty line behind the boat for a few minutes. This does an excellent job of removing line twist.

Close the bail by hand

After a cast, always close the bail by hand. Training yourself to do this will reduce your wind knots drastically. Most spinning reels will automatically close the bail for you when you turn the handle, but sometimes this causes the line to miss the spool on that initial rotation, leaving a loose loop, which will become a wind knot on the next cast. By closing the bail by hand, it assures the line has been gathered completely by the bail and is being laid onto the spool properly.

Feather with the forefinger

Learning to "feather" the line with your forefinger during the cast and retrieve is a big step in becoming proficient with spinning gear. Feathering during a cast means lightly touching your forefinger to the spool lip to control how fast the line comes off and, consequently, how much line comes off. Put another way, feathering is the way to control your casting distance and put the lure exactly where you want it. It's also important to feather your forefinger lightly against the line when reeling line back in, too. This is especially true when using lures that don't provide much tension on the line. Reeling in "loose" line or "slack" line is where you get in trouble with spinning gear. This is where the bail does not have enough light tension on it to wrap the line on the spool and a loose loop gets in the spool, which causes problems later. The simple solution to this is to point your forefinger into the line while reeling. As it laps by and brushes your forefinger it creates tension on the line to spool it tight.

Don't reel against the drag

For some reason, which an engineer could better explain, when a spinning reel is reeled against the drag, it does nothing but twist the line. So here is the ground rule with spinning reels: if you hear the drag, do not reel. If a fish is stripping drag, do not reel over top of the drag â€“ just hold the rod, let the fish make a run against the drag and when the drag stops "screaming," start reeling again to gain line back.