Put out the right vibe for more fishing action

Much like a sports bettor on a big football weekend, in the world of lure maker Patrick Sebile, action is everything. Action is not simply a wiggle or a motion in Sebile's grand scheme of lure design. Action is everything... everything a lure does to attract attention and stimulate either feeding or aggressive behavior on the part of predator fish. 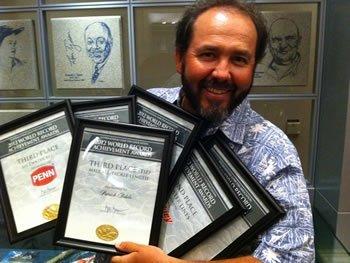 When you look at the many great lures in the Sebile line â€” the Magic Swimmer, the Pivot Frog, the Vibrato, the Stick Shad, the Flat Shad â€” the action of the lure is not defined by a single motion or movement.

Sebile explains that water displacement is the key to the effectiveness of a lure. For example, the Magic Swimmer hard bait is just designed to swim in a seductive, snake-like side-to-side manner. Patrick spent many hours in development shaping the contours and curves of the lure so as to create the maximum amount of turbulence from that swimming motion.

The smaller version of the Stick Shad comes in a series of blood red colors that include a liquid in the lure that moves with the motion of the bait, mimicking the vibrations of a bleeding bait's lateral line.

When it comes to winter and ice fishing, nothing beats vibration for producing bites in the toughest of circumstances. While fish located under the ice might often be quite willing to feed, they nonetheless are reluctant to move far to take a bait, notes Sebile.

That's where the magic of a lure like the Vibrato comes into play. The Vibrato flutters hard on the fall, which simulates a dying baitfish. Perhaps even more important for attracting biters is the intense vibrating action the Vibrato creates with the shortest upstroke twitch of the rod.

When you mark fish on your finder, whether it's through a hole in the ice or over deep water, the Vibrato is the perfect lure to use to nag, entice and generally irritate bass or walleye into taking the hook. Drop the lure into the middle of the fish and repeatedly lift the Vibrato and let it fall. The less active the fish, the more subtle and limited in distance the sweep of the rod tip.

"Lots of times you'll put the reel in gear after letting the Vibrato fall and you will have a fish on," says Sebile. And isn't that what it's all about?