Striped Bass Appeal a Given for SÃ©bile 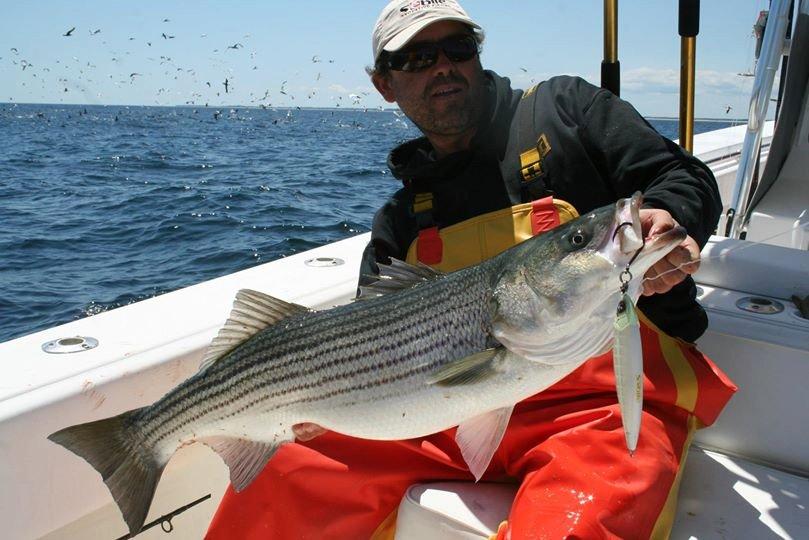 The first fish a young angler seriously targets forever is the species all other catches are measured against. For lure maker Patrick SÃ©bile, fishing the first time for striped bass in the United States was a voyage back to his youth and native country of France, while at the same time a welcome to the country he has chosen to call home for many years now.

â€œEuropean seabass have no stripes and they are a much smaller average size, from 1 to 4 pounds, and 24 pounds is the all-tackle record,â€ he adds. â€œComing to the US and having a chance to get striped bass was like getting to catch a giant European seabass, like catching a trophy fish in my home country.

â€œI remember my first striped bass very well. I was fishing Montauk on the east end of Long Island,â€ recalls Patrick. â€œMy first striper was about 8 to 10 pounds, I donâ€™t know for sure because I released it, but it was the size of a very good European seabass. The stripes looked exquisite to a French guy.â€

Needless to say SÃ©bile has been taking his fishing passion and his lures to the Northeastern coast of the U.S. in search of striped bass.

He notes that the fishing approach is very similar for both fish, which share the life history of spawning in fresh or brackish water and then heading to the ocean to feed and grow, often moving close to the beach and the outlets of rivers and bays where forage is abundant.

â€œBoth striped bass and European bass like the white water, breaking waves, sand bars, ripping currents, basically everything that is true for European seabass is true for striped bass,â€ Patrick points out. â€œWhat I had to learn was the difference between fishing Europe and the U.S. Until recently there has been very little management of seabass in Europe and there is very much pressure from commercial and recreational anglers, who kill everything they catch and take it home to eat. In the U.S., people are used to catch and release and only keep a reasonable amount of fish

â€œSo in Europe with all that pressure you have to use very light line and you can get away with it because the fish are small. They can fish with 2 to 6-pound line and only in a few instances fish 20-pound,â€ he adds. â€œHere in the U.S. people like heavier gear because there is always the chance for a giant one. They use 30, 40, 50, 60 and even 80-pound line.

â€œThatâ€™s an approach that is very exciting to me, thatâ€™s why 20 years later I live in the United States.â€

Whatâ€™s not to be excited about when targeting a fish that grows to 80 pounds?

â€œI get excited about fishing large lures and big fish that can really fight,â€ explains SÃ©bile.  â€œWhen you are using 40-pound test and a 12-foot surf rod you can really feel the fish on the line. Tiny fish are cool, just not really exciting. When you think you can catch a 40-pound fish on your next cast, thatâ€™s very exciting!â€

Usually you wonâ€™t hear a lure maker advise an angler not to load up on tackle, yet SÃ©bile, a surfcaster practically from birth, knows the key is to go light and bring the right lures.

â€œTypically for striped bass I will not bring a big box of lures, since most of the time you are fishing from the shore, beaches and rocks,â€ Patrick notes. â€œWhen you are on the beach you cantâ€™ bring a giant bag, you need to have a bag thatâ€™s reasonable to carry on your back, especially when the spot is 100 yards from shore and you need a drysuit or wetsuit to get out there.â€

Action is always foremast when SÃ©bile designs his lures and when he has to make the decision about which of his lures is perfect for the conditions and the fish on hand. Yet success surfcasting is often a distance game, so thatâ€™s a major consideration when fishing bass in the Northeast.

â€œFor striped bass I like the Stick Shadd in the 155 and 182 sizes in the Sinking and the Fast Sinking models,â€ says SÃ©bile. â€œWhen it purely comes to distance, one lure that casts the farthest of all, one lure that beats everything else, is the 155 Stick Shadd Fast Sinking. The great thing about that model, the ratio and relationship of size, volume and weight makes the 155 FS truly cast like a bullet whether it is windy or not.â€

The best action? Well thatâ€™s up to the angler to manipulate.

â€œYou might think fast sinking means a lure will only fish deep, but thatâ€™s not true,â€ explains SÃ©bile. â€œSure you can let it dive deep, yet you might not want the lure to hit the bottom. Used from the beach where the water is shallow, for example, you can cast out and start reeling right away and the fast sinking lure will swim in only a few feet of water. You can keep it that deep or even reel really fast and the lure will swim at less than a foot deep â€“ a very effective method when the fish are on top.â€

There are other actions you can get from both the sinking and the fast sinking models.

â€œTwitching or jerking the bait, reeling slower then faster, varying the retrieve is super effective in breakers or white water,â€ adds SÃ©bile. â€œSometime when the Stick Shadd does land on the sand underwater, let it sit, then start it again and often thatâ€™s when you will get a bite. That trick is very good and often works for me.

â€œAnother technique, especially when there is little activity and at nighttime, is just to have a steady retrieve. This gives the Stick Shadd an â€œsâ€ swimming action -- right, left, right, left.â€

SÃ©bile carries another lure in case the fish are touchy.

â€œSometimes you can see a swirl behind the lure or fish under the lure and they are not biting, thatâ€™s definitely the time to go to the Magic Swimmer, the 190 Fast Sinking,â€ says SÃ©bile. â€œAgain that means the lure can dive deep if you want it to, however if you start to wind as soon as it hits the water, you can keep it a foot or two deep and keep it near the surface over sand and rocks.

â€œThe Magic Swimmer has that very subtle action that seduces fish, and works super well in the fast white water, whether the wave is breaking or not,â€ he notes.  â€œLet the wave action move the bait, when water pulls back from the beach you get a very fast action without reeling that produces lots of bites.â€

SÃ©bile does keep one of his floating lures in the striper lineup.

â€œI like to use the 190 Floating Magic Swimmer when the water is flat whether the current is ripping or not,â€ he says. â€œOne tip is to cast towards the cape or channel with ripping current, let 15 to 20 yards of line out, then put your finger on the line to stop it and give the lure action. Then let it out again, pinch the line again, and when the lure is finally out then you reel it slowly just to give the wake, that tiny wake you see tiny baitfish make. The whole time you are letting the current produce most of the action and you can get a bite at any time.

â€œWhen it is snaggy or there is lots of great, try the Magic Swimmer Soft. It has the same action but the wide gap hook is hidden in the body and the lure is weedless. It also has a new mesh inside that helps it hold up to big fish.â€

â€œLike I said, striped bass are truly fantastic big fish, and if you know there are really big fish around, we have the big baits that get them,â€ promises Patrick. â€œThe 210 (8 Â¼ inches) Sinking Stick Shadd is an excellent big fish bait, while the Magic Swimmer 228 (9 inches) is ideal for big fat stripers looking for big baits -- trolled or cast it is perfect for targeting the striped bass of a lifetime.â€