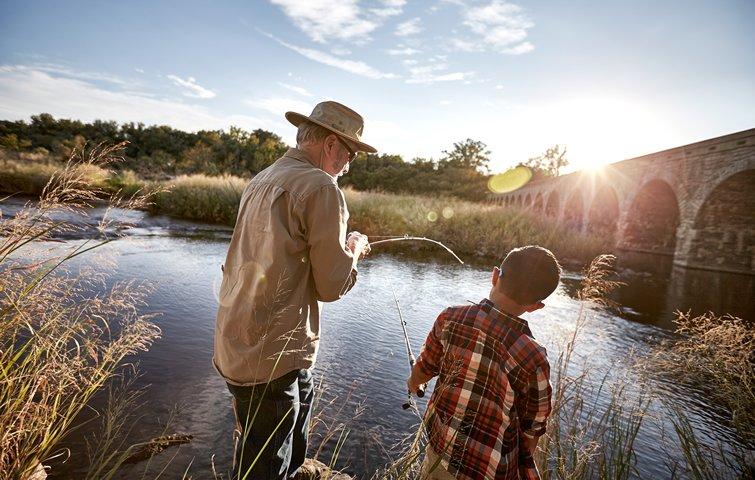 Fishing skills like casting and pitching jigs can be learned at home or a backyard pond, and you can gather mountains of information from study, but the most underrated component of fishing success is the ability to decipher the codes of the natural world.

Spend quality time with outstanding anglers, and you will be impressed by how many of Nature's clues they sense and process while they are on the water.

The sight of schools of bass and sunfish fry swimming in the shallows indicates that bass are recuperating from their spawn and multiple species of fish are about to start feeding heavily.

Birds circling and diving over pods of baitfish is an almost certain sign that bigger fish are staging a similar scene below them.

The timing of seasonal blooms often coincides with particular stages of the fish's calendar. In much of the Midwest, for example, anglers identify blooming lilacs as a sign that largemouth bass have entered into their pre-spawn stage. Such knowledge enables an angler to focus on high-percentage areas and narrow the selection of lures and techniques.

Nature is a web of interdependence with minute creatures supplying sustenance for larger creature, plants providing needed habitat, and even rock and mud proving essential to the insects and crayfish that so many species rely upon for food.

Aquatic vegetation provides a home for forage and predator species alike. Learn to distinguish the types of plant life that are most favorable to fish on your waters. Note the types of bottom content where it is found and the transitions from one type of plant and/or bottom type to another. Dialing into subtle connections like these may boost your understanding of the importance of habitat.

Fish species interact as well. Largemouth bass and members of the sunfish family like bluegill are often found inhabiting the same areas. Feeding on insects, plankton and minnows, the smaller sunfish species provide important forage for bass. Find loads of those Snicker bar-sized bluegill and bass are likely to be nearby.

Similarly, walleye and perch often live together. The larger walleye - along with their sauger cousins - frequently feed on perch.

Hatches of mayflies, stoneflies, and other insects often set the stage for feeding spectacles. The sight of trout rising to the surface to sip newly hatched mayflies is a treat that never grows old. The wise fisherman takes advantage of these special morning and evening hatches to learn the locations of prime feeding and holding areas - and sometimes even the location of the kinds of big fish that light up the imagination.

If you are lucky to find a veteran fly fisherman who is willing to share his time and experience, have him tell you about the stages of insects and the categories of artificial flies in his fly box that imitate each. A good bass fishermen can deliver the same type of education relating the lures in his tackle trays to prime forage species.

Birdlife is abundant around most lakes and streams. Take in the beauty and diversity of these flying/swimming/wading creatures, but take time, too, to note their activity.

As noted earlier, circling gulls usually indicate the presence of baitfish and larger fish forcing them to the surface. But many fishermen regard the presence of loons as a more reliable indicator of nearby fish.

Redwing blackbirds love "edge" areas. You can see them often around emergent shoreline vegetation. One prominent bass pro recently credited a major tournament win to recognizing the presence of these distinctive and highly territorial birds.

Think of herons and egrets as fellow fishermen. They wade carefully in shallow areas fish are likely to inhabit. Eagles and osprey can capture fairly large fish in their talons sweeping down on an unsuspecting fish swimming near the surface. Pelicans, along with other species, plunge head-first to capture fish that may be several feet below the surface. To witness such activity is always a treat - as well as proof of fish presence!

Good fishermen are always alert to weather conditions and impending weather changes. Invariably, they relate changes like cold fronts and heavy rains to how they affect fish activity. They view an approaching weather system as a signal that a change in fish location and behavior is at hand and alter their tactics accordingly.

Bluebird skies following a cold front make us all feel like enjoying the outdoors, but often such conditions make for tough fishing. Periods of stable weather with a hazy build-up of cloud cover generally provide better conditions for fish and fishing success. Don't shy from overcast days or even a gentle rain. Some of the best catches come under such conditions.

Nature on the move

A general increase in animal activity on land and around the water's edge often corresponds to an increase in fish activity as well. Look for signs of frog and turtle movement, of baitfish dimpling the surface, and, of course, those heart-stopping swirls of predator activity around your boat or dock.

Of course, successful fishing and nature watching require that you blend into the natural environment. Move quietly and with stealth as you walk the bank, wade a stream or fish from a boat. You will see more - and catch more, too!

As useful as some of these clues can be to your fishing success, sharing these observations with friends and newcomers to fishing adds a dimension to fishing that hearkens back to the educations our primitive ancestors handed down to their offspring and members of their clan - the kind of knowledge upon which individual and group survival once relied!

Learn to enjoy and profit from every on-the-water experience. Convert your understanding into more productive time on the water. Immerse yourself n the world around you and recognize that you are an equally wondrous element in that world -- and steward to it!