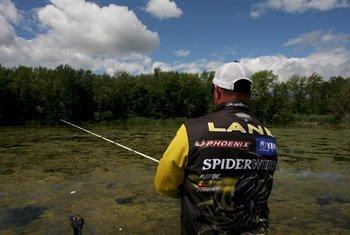 "When I'm going down the bank flipping and pitching to visible cover, a pattern or theme will usually develop over the course of the day that that will give me a better idea about where my next bite will come from.

"I was catching some shallow largemouth flipping a Texas-rigged Berkley HAVOC Craw Fatty or Berkley HAVOC Rocket Craw to visible cover at the Elite Series tournament on the Sabine River, but I was able to catch a lot more once I pinpointed a certain combination of cover that seemed to always hold a keeper. I caught a few fish around logs and I caught a few fish around hyacinth mats, but I caught a keeper nearly every time I found an isolated log that was positioned directly behind a hyacinth mat. Once I realized the right combination, I was able to look at a bank and immediately find the most productive areas to fish."