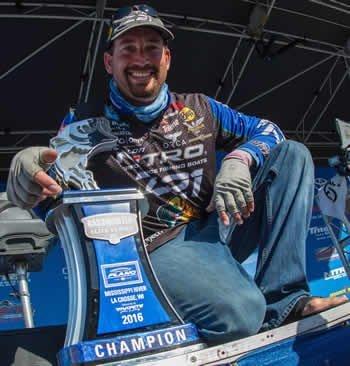 Pflueger pro Ott Defoe claimed victory at the Bassmaster Elite tournament on the upper Mississippi River at Lacrosse, Wis. Defoe's final weight for the four-day tournament was 63-10, over a pound heavier than the runner up's weight.

It was the anglers first Bassmaster Elite win. Defoe was named B.A.S.S. Rookie of the Year in 2011 and has qualified for the Bassmaster Classic five times.

The Knoxville, Tenn. Native fished the entire tournament in Pool 8 of the Upper Mississippi River. He spent mornings in front of a low-head spillway before ending his day on grass flats at the southern end of the pool.