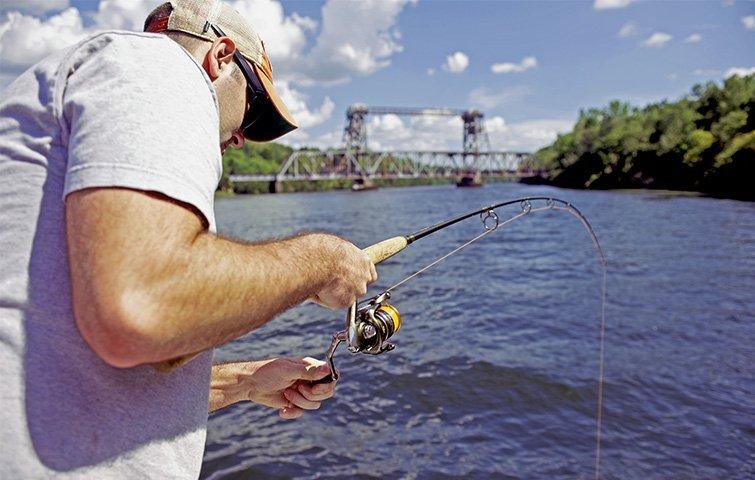 Fishing for catfish is fun. They fight hard, are plentiful and taste great on the dinner table. Catfish are often willing biters, too, and can be readily caught from the bank as well as from a boat using a simple bait rig. The following's a short guide for catching catfish.

Where and When to Catch Catfish

Catfish can thrive in many water systems, from shallow, warm ponds to fast rivers. While different species may like varying habitats, there are general areas that tend to hold catfish.

During the day, look for catfish in muddy water areas, such as a tributary and its outflow. Also good are deep structures, like river bends, the base of drop-offs, deep holes, and humps. Catfish will also hold around cover, like standing timber and deep weed edges.

Night brings excellent fishing. Catfish use their heightened senses of smell and taste, along with their barbels (whiskers) to locate food in the dark. Flats, bars, points, shorelines and weedy areas are common spots to catch prowling cats at night.

It doesn't take much tackle to catch catfish. The following's a basic kit for small to average-sized fish.

How to Catch Catfish

A slip-sinker rig's a popular set-up given that catfish are often located near bottom. It's made by threading a sinker on the mainline, then a bead. Next, the mainline is tied to one end of a swivel. On the swivel's other end is a 1 to 2 foot monofilament leader, followed by the hook. The rig can be left on bottom or hovered above the floor when drifting an area.

A float rig's another option. Simply add a float above the weight on a slip-sinker rig. Use this rig to drift bait slowly through wood-rich catfish lairs or over weed without snagging on bottom or in cover. Drifting a float also helps cover water from the bank.

A jig head (link to the jig head article) tipped with bait will also catch catfish. Lift and drop the jig along bottom. Occasionally holding it still often leads to a bite.

Sometimes catfish hit hard and quick. Other times they play with the bait before taking it fully. When in doubt, set the hook. A common rig-fishing strategy is feeding line to a nibbling catfish, so it won't feel resistance. When the fish steadily takes line, it's hook-set time.

Give fishing for catfish a try. Pound-for-pound, these hard-fighting fish serve-up fun days on the water.