Johnson's reputation for producing some of the best crappie baits on the market continued this year with the Crappie Buster Shad Scales. This new attractant proved itself already as a go-to tool for Pro staffer, Richard Williams, and his fishing partner, David Jones, who recently won the Cabela's USA Crappie Tournament Championship held on Lake Cumberland, Ky. 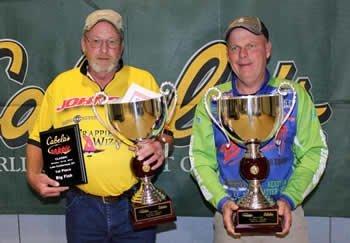 Weighing in over 19 pounds of crappie during the two-day event gave the pair a narrow .04 ounce victory.

Williams is also credited for landing the largest fish of the championship, a 2.41-pound crappie that also fell for the Shad Scales.

"We knew it would be tight, but we trusted our products and kept our heads down," said Williams. "The first day went really well for us, but we did have a little drop in productivity on the second day. I think the fish just moved out on us. I'm just glad I had enough Shad Scales in the boat to make it through the event."