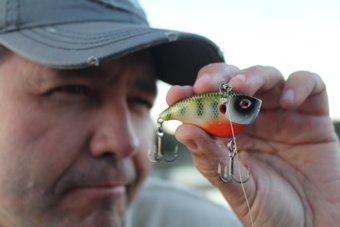 French angler Patrick SÃ©bile is founder and lure designer of his namesake tackle company, SÃ©bile Innovative Fishing, founded in 2006. An IGFA Representative and dedicated conservationist of fish and their habitats, SÃ©bile ran his own sportfishing lodge in Africa for over 15 years, he has written seven books and hundreds of articles on fishing and has graced over 150 fishing magazine covers. Throughout his career, SÃ©bile has held 300 IGFA, European and French national fishing records.

Patrick SÃ©bile is a fanatical angler who spends his time touring the world's waters. Since 1984, SÃ©bile has meticulously kept his own records of species caught in fresh and salt water across 64 countries. In April of 2014, Sebile landed his 734th species of fish, a Vermillion Snapper, while fishing off the Catalina Islands, in California.

It is this passion, experience and in depth knowledge of the widest possible range of species and fishing styles that informs Patrick SÃ©bile's lure designs. SÃ©bile combines his love of fishing with a background in mechanical design principles such as turbulence and hydrodynamics to make his lures more effectively replicate a real life baitfish. Complex body shapes never seen before are the trademark of such SÃ‰BILE lures as the Magic Swimmer, Koolie Minnow, Onduspoon, Flat Shad, Stick Shad, and most recently the Action First series of Bass lures.