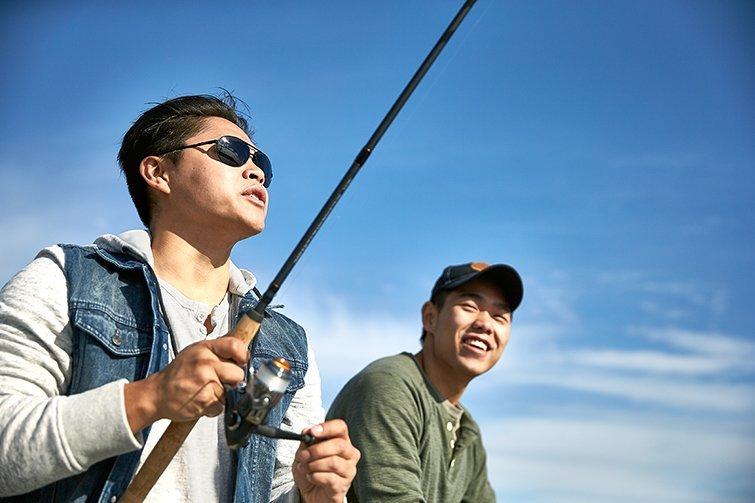 Autumn is the lost season for countless anglers who trade their time on the water for hunting, football and indoor activities from September through December.

Too bad! They are missing out on what could be their most cherished season -- if only they would give it a chance!

Fall marks a period of change for fish and fishermen. The small bite-size forage supply of summer™s salad days is largely gone. Larger minnows and bigger lures come into play until later in the season when colder water temperatures and slower fish metabolisms make smaller baits a better choice.

Changing conditions cause forage to relocate, and predator species adjust accordingly by either following the surviving food sources to autumn locations or adapting to the food supply in the areas they inhabit.

Fish sense the coming winter and begin to pack on pounds during the transition, feeding heavily while burning fewer calories in their increasingly cold liquid environment.

For anglers, time on the water has a special look and feel during the autumn transition thanks in great part to benign weather, abundant beauty and cooperative fish. The sun travels a lower arc. Heat and humidity fall. Foliage takes on brilliant hues.

On-the-water traffic declines dramatically after Labor Day and further diminishes as the calendar edges closer to winter. The water is yours!

Timing is everything during the autumn season.

Turnover, a phenomenon that takes place on many lakes as cooling water from the surface mixes with cool water from below, can make fishing tough for days or even a week or more. Turbid water littered with decaying plant life may dictate a move to another lake.

Gizzard shad and threadfin shad move into coves and creek arms, and their movements govern the movements of predators that depend on them, such as bass.

Locate species like largemouth bass or white bass tracking schools of shad onto windblown flats or other structure and hot action with surface and sub-surface shad-shaped baits will likely follow.

Bluegill and other members of the sunfish family serve as critical forage species in countless ponds, natural lakes and reservoirs. Their movement to deep edges of aquatic vegetation draws bass and toothy predators like northern pike and musky.

Signs of fish activity can pave the way to an angling bonanza.

Birds feeding over open water often betray schools of baitfish and the largemouth bass or striped bass herding them from below. Surface boils are usually signs of feeding fish. Move stealthily to the activity if you can and cast to the edges of the fray. Try surface lures or sinking lures resembling the suspected prey.

Many areas of the county find major frog migrations taking place during the fall season. Largemouth bass, smallmouth bass and other predator species often wait in ambush for this suddenly vulnerable food source as they move to wintering areas. Faux frogs shine at this time.

Fall fishing can be rewarding even when the fish™s food supply is scattered and in relatively short supply. Target species may be scattered from shallow flats to deep structure.

Catching a fish here and there on a variety of lures is characteristic of the junk fishing approach that can make for a productive day even when no discernible pattern comes into play.

Moving lures like lipless crankbaits, spinnerbaits and buzzbaits may pick off several fish in the morning, while plastic worms, jigs and soft plastic jerkbaits prove to be the ticket minutes or hours later.

As the season advances and water temperatures continue to cool, fall's faithful know that trophy time has arrived.

Fish location and behavior become more predictable. Big fish group together in prime locations. Look for underwater points, sunken islands, and the deep edges of aquatic vegetation to hold multiple species. Rock piles may hold mixes of smallmouth bass and walleye with bonus northern pike or even a musky thrown in. On reservoirs, isolated stump fields and turns in creek and river beds may be stacked with fish that were widely scattered months earlier.

Jig and minnow combinations were once the odds-on choice of late fall anglers, and this mix remains reliable today. But jigs with soft plastic grubs and other trailers can be equally effective.

Suspending jerkbaits -- minnow style lures sometimes referred to as twitch baits -- shine at this time of year. Presentation generally consists of one or more jerks followed by a pause. Try to establish a cadence that the fish favor. Vary the number of jerks and the length of the pause between them. Intervals of three, five or even 10 seconds or more between twitches may be the order of the day.

Blade baits like the Johnson ThinFisher also shine once water temperatures dip below 55 degrees. For best results, shelve the aggressive retrieves that may have served you in summer and substitute relatively short, slow vibrating pulls to simulate the struggles of a dying baitfish.

Nature moves at a snails pace as cold weather advances, and, while fish move and feed aggressively through the early phases of fall, the relatively fast pace of fishing that worked successfully then should be countered with a much more patient approach as water temperatures dip into the low-40s and below.

Ice fishermen know that a subtle hard water bite may be barely detectible even from their statue-like posture over an ice hole. That fact should give you a clue to the importance of boat control, slow presentations, sensitive tackle and heightened awareness in late fall.

Once you have identified a high percentage fish location, let stillness rule. Anchor your boat and fish the area slowly and thoroughly. Target the area from different angles, positioning your boat carefully each time. If wind is a factor, position your boat so that you are casting either with or into the wind to minimize the wind™s effect on your line and your ability to detect a bite.

Above all, enjoy the beauty and rare solitude of the season. Adjusting to nature™s pace may take some getting used to, but the rewards are there for the taking. Dress for the weather, and take advantage of this magical time!